"The Duke" and the Cultural Fundies 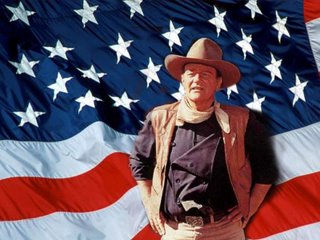 Psalm 138:6 "For though the LORD is exalted, Yet He regards the lowly, But the haughty He knows from afar."

We want to get things back on track here at Bread and Circuses--the last couple of weeks have been filled with laughter and sadness over the man-worship going on among those on the fringes of Christian Fundamentalism. As I thought and meditated on this tragic philosophy, I came across a couple of articles that stirred my thoughts.

If you are looking for the headquarters of the Cultural Fundamentalists, you need look no further than First Baptist Church of Hammond, Indiana. Recently I had the joy of reading a blog article that reminded me of the many years I spent smack-dab in the middle of IFBXdom. I found this article by way of Sharper Iron and it was written by Dr. Sean Michael Lucas of Covenant Theological Seminary in Saint Louis, Missouri. Dr. Lucas is a BJU and Westminster Theological Seminary graduate and conservative Presbyterian. He was commenting on the recent Youth Conference video that we highlighted a few weeks ago--his comments reached back into my memory banks and brought to thought some themes that I heard on a regular basis growing up as a hysterical Baptist. He mentioned the connection he has noticed between some Fundamentalists and their typical cult-like following of a "muscular personality". If you have not read his post yet I would highly recommend that you give it your attention.

FBCH was and still is led by a pastor who loves to invoke his similarities to a "rootin' tootin' cowboy" or "spiritual renegade". There was and still are certain elements of machismo and imperiousness, not to mention the standard braggadocio and swagger that goes along with being the "biggest and best in the world." The stories I heard growing up were of Jack Hyles, Lee Roberson, John Rice, and Lester Roloff being "kicked out" of the SBC. Another story I heard ad nauseum was that "Preacher x" was a sissy because he wore a dress to lecture his church on Sunday morning. Often times "Preacher x's" name was changed to reflect a woman's name in order to incite more hootin' and hollerin' from the crowd. Pastor Hyles would say things about how the pulpit was his and if he wanted to split his britches on his pulpit that it was his business--the deacons were to stay out of his preachin' or else there was going to be a gunfight at sundown in Dodge! There was one bit Jack Hyles did where he would say "some of you here think I shouldn't call names when I'm preachin'...OK then don't you ever do it!" The idea that Hyles was a rebel with a cause--to save America and your future children and grandchildren from the evils of everything not associated with his empire--was pushed on a regular basis. Now FBCHers are fed a steady diet of these same old Hyles stories as well as legends of Pastor Schaap and his adventures at Pillsbury Baptist Bible College--Pastor Schaap wanted the power of God and these dead and dry "neos" ran him off because he was a zealous soulwinner!? Someone really ought to produce a full length movie about these men--the comedic value would be priceless!

Some of you may wonder why all the emphasis on Jack Hyles since he has been dead and gone for years--first of all, it is the culturalists who keep bringing up his "legacy". The Youth Conference video is a perfect example, but not an isolated incident. Secondly, you would be hard pressed to listen to a sermon by Jack Schaap and NOT find a reference to Jack Hyles and his "legacy"--his muscular memory is still very powerful to those in IFBXdom and Pastor Schaap takes every opportunity to keep that alive. What is most troubling is the fact that Pastor Schaap is also perceived as a muscular personality in his own rite. I would encourage everyone here to take the time to listen to some of his sermons at the Baptist City website.

I am an independent baptistic neo-fundamentalist--I do not identify anymore with the muscular personalities on the fringes of Fundamentalism and their silly personal fiefdoms as Dr. Lucas described them. I believe that man-centered philosophies of ministry and muscular personalities are intrinsically linked to one another--these teachings should be abhorred and denounced with vigor by Christ followers whenever and wherever they are detected.

Psalm 12:3 NASB "May the Lord cut off all flattering lips, the tongue that makes great boasts,"

Phineas
Posted by Matthew Richards at 11:01 AM 13 comments:

The Gaudy Shoes Of An IFBX Icon 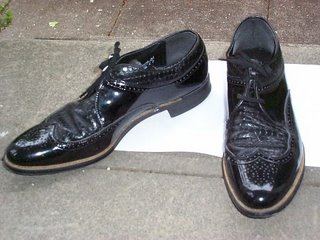 Following is a poem that my friend, Pat, wrote about a different part of Dr. Hyles' legacy. I have also included a never before seen stanza towards the end of the poem. If this ballad brings you even half the joy that it brought to me you will be greatly enriched! Enjoy!

Wow, that was really inspiring. It got me to thinking about other instruments that were used to support this man of God. Of course, when I'm inspired, I use iambic pentameter.

I was born in a lowly stable
just a little spotted calf,
I sensed my life would not be long,
I'd never grow to play and laugh.

My mother was an older cow
Who provided milk and cream
But as a male I was born to die
Long life was just a dream.

But still there was some hope for me
That I could do some good
I'’d heard about this royal chair
That started as some wood.

Or maybe I'’d be the belt of truth
Wrapped 'round the God man'’s waist
I'’d hold him up as he preached the Word
and save dear souls with haste.

I have an even higher dream
If I could be so bold
Could I just be a leather coat
To shelter him from cold.

What'’s this I hear you have in store
What is this fate I'’ll meet?
I'm going to be a pair of shoes?
You'’re going to put me on his feet?

Stacy Adams? Who are they?
Designers of men's clothes?
How I wish I could just be a coat,
Rather than cover his toes.

Oh please, dear Lord, why must I be
given a fate so bleak
To have to endure smelly socks
seven days a week

But then I heard the Lord's reply
and I want the world to know
That while the coat would keep him warm
His shoes would make him go.

The miles he trod to seek the lost
he made through snow and rain
and I protected him from the cold
and kept him out of pain.

I walked with him for many miles
I caught his many tears
I also felt his laughs and smiles
As he wore me through the years.

Now I see God'’s bigger plan
that He had in store for me
Of all the things God could have done
I became part of history.

I never preached a sermon
I never read the Word
But I was there for every step
As he made God'’s voice heard.

Just a humble little calf
born in a stable filled with hay,
What have I done in my life you ask?
This is what I say:

I provided soles that saved some souls
and filled some empty pews;
Without a voice I preached the word
For I became Jack Hyles' shoes.

If that doesn't put a tear in your eye and a lump in your throat you just might want to check your pulse. You will notice that my new friend, Pat, honored my wishes for a reference to Stacy Adams--I laughed so hard I cried. I want to publicly thank Pat for his quick whit and medicinal ode! Any other aspiring versifiers or sonneteers out there? Feel free to scratch one out in a comment--you may just end up as a guest blogger at B&C!

The Golden Throne Of An IFBX Icon

I wanted to take this opportunity and post something on more of a light note. We have all been grieved and saddened by the horrendous assumptions and outright man-worship exhibited in the video from the First Baptist Youth Conference. All of the controversy and attention on Jack Hyles' golden chair er throne reminded me of something I read a couple of years ago.

I imagine that the actual chair that Jack Hyles sat ensconced upon week after week in Hammond is actually on display somewhere. If I were a betting man I would wager that the well-worn golden-hewed throne is enclosed in the glass case of a memorabilia room at 8400 Burr Street. Chances are it is somewhere between a pair of Pastor Hyles' black Stacey Adams shoes and the wreckage of Lester Roloff's last flight.

As we head into the weekend I want everyone here to just kick back and enjoy reading this poem written by Pastor Jack Schaap as the plush golden chair that Pastor Hyles enjoyed for many decades was retired from service. I remember as a young child hearing a poem read similar to this one only focusing on Christ's manger, a boat He preached from, and the cross on which He was crucified. Somehow this poem does not have the same "punch" for obvious reasons (unless you are a rabid Hylesite).

Well, here we go--enjoy this masterpiece that was read at Pastor's School 2001. I am looking forward to your comments.

Phineas
Posted by Matthew Richards at 10:55 AM 11 comments: 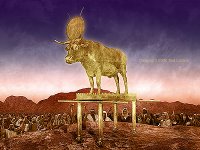 HYSTERIC FUNDIES AND THEIR FERTILE IMAGINATIONS

You can find the video here--I recommend that everyone view this realizing that we here at Bread and Circuses did NOT produce this video to bolster the points we have been making the last few months! It is almost too perfect in that it fits everything that has been said concerning the anthropocentric philosophy of ministry put forth in Hammond. As you might suspect there are those who can view this filth and not find anything out of line--this is sad but not surprising when dealing with this group.

If you listen closely you will hear the adoring fans in the background as this was shown at Youth Conference 2006--or was it a rock concert? Not sure judging by the screaming fans as the name "Jack Hyles" was announced!

Here is a brief view of the characters found in the video--notice the relevance of most and the irrelevance of a few:

The connection between these events and First Baptist of Hammond is ludicrous. Nothing more than the exaltation of man and the emotional manipulation of young people in promotion of decisionism. 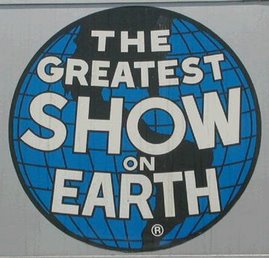